Travelling to these Parks there are thousands of creatures that are worth viewing such as Elephants, Zebras, Buffalo and others.

The Northern Circuit's main draw is the massive Serengeti ecosystem, encompassing the Ngorongoro Crater Highlands, which is one of the biggest remaining animal migration routes in the world. 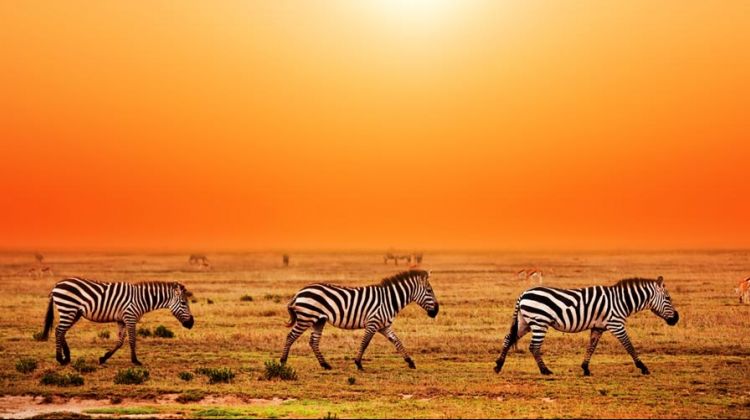 Arrive JRO international airport, after clearance of immigration formalities: you will met by our officer at the arrival door, greeted and transferred to Arusha for Overnight

After breakfast drive to Serengeti National Park, Serengeti National Park, in northern Tanzania, is known for its massive annual migration of wildebeest and zebra. Seeking new pasture, the herds move north from their breeding grounds in the grassy southern plains. Many cross the marshy western corridor’s crocodile-infested Grumeti River. Others veer northeast to the Lobo Hills, home to black eagles. Black rhinos inhabit the granite outcrops of the Moru Kopjes.

After breakfast enjoy a full day game drive, The Park can be divided into 3 sections. The popular southern/central part (Seronera Valley), is what the Maasai called the “serengit”, the land of endless plains. Its classic savannah, dotted with acacias and filled with wildlife. The western corridor is marked by the Grumeti River, and has more forests and dense bush. The north, Lobo area, meets up with Kenya’s Masai Mara Reserve, is the least visited section.

After breakfast enjoy your last day game drive and walking safari at Serengeti, The Serengeti ecosystem is one of the oldest on earth. The essential features of climate, vegetation and fauna have barely changed in the past million years. Early man himself made an appearance in Olduvai Gorge about two million years ago. Some patterns of life, death, adaptation and migration are as old as the hills themselves. It is the migration for which Serengeti is perhaps most famous. Over a million wildebeest and about 200,000 zebras flow south from the northern hills to the southern plains for the short rains every October and November, and then swirl west and north after the long rains in April, May and June. So strong is the ancient instinct to move that no drought, gorge or crocodile infested river can hold them back. The Wildebeest travel through a variety of parks, reserves and protected areas and through a variety of habitat. Join us to explore the different forms of vegetation and landscapes of the Serengeti ecosystem and meet some of their most fascinating inhabitants
Dinner and Overnight at Tented Camp

After breakfast drive to Tarangire, Tarangire National Park is the sixth largest national park in Tanzania, it is located in Manyara Region. The name of the park originates from the Tarangire River that crosses the park.
Dinner and Overnight at Tented Camp

After breakfast enjoy fully day game, The Tarangire National Park is located between the meadows of Masai Steppe to the south east and the lakes of the Great Rift Valley to the north and west. Among the rolling area where the park lies, it occupies an area of 2,600 square kilometers. The perennial Tarangire River takes over the northern part of Tarangire. Through the cut ditches, the River flows upwards up to when it leaves the corner of the park, in the North West flowing into Lake Burungi. There are a number of wide swamps which dry into green plains during the dry season in the south.

After breakfast drive to Ngorongoro National Park, The Ngorongoro Crater is the world’s largest intact volcanic caldera.  Forming a spectacular bowl of about 265 square kilometers, with sides up to 600 meters deep; it is home to approximately 30,000 animals at any one time.  The Crater rim is over 2,200 meters high and experiences its own climate.  From this high vantage point it is possible to make out the tiny shapes of animals making their way around the crater floor far below.  Swathes of cloud hang around the rocky rim most days of the year and it’s one of the few places in Tanzania where it can get chilly at night.
Dinner and Overnight at Tented Camp

Breakfast is served at the tent, drive to Kilimanjaro airport assist to board your onward flight


Well, we aren't Facebook but we love reactions too.
They can give us valuable insights on how to improve what we're doing. Would you tell us how you feel about this package "9 days safari at Serengeti, Ngorongoro & Tarangire" on a comment down below.

If you enjoyed this holiday package ...

Customizable itineraries where you may choose transport, stay & sightseeing as per your taste & comfort

The Ngorongoro Crater is a breathtakingly beautiful setting and the best place in Tanzania to see the Big Five, Visiting the National Parks on the Northern circuit marks the wonderful experience in Tanzania.